1. #Bacteria are everywhere… also in our tongues! 🦠👅 You can see them in these astonishing pictures! 👇

There are trillions of bacteria living in different parts of our bodies, and many of them have made their homes in our tongues. Different microbes live on this organ and, surprisingly, they have set very organised communities. As human cities are arranged into neighbourhoods and specific areas such as harbours or parks, different species are located in specific parts of the tongue. For example, oxygen loving bacteria such as Streptococci thrive around the outskirts of the tongue, where they are more exposed to air, while other species like Actinomyces prefer to be tucked closer to its center. This knowledge may allow researchers to learn more about the role of these microbes in our bodies! To the publication>

2. These breathtaking pictures are made by #bacteria! 🎞🦠 Visual artist @MarcusDeSieno took photographic film of space images and forced these microbes to grow on it! 👇

One of the most amazing facts of microbes is that, even when they are invisible to the naked eye, they grow in virtually all places on Earth. This includes all the surfaces that we touch in our daily life and even our own bodies. The existence of this overwhelming microscopic universe has inspired photographer Marcus DeSieno to create an astonishing art project: Cosmos. This artist collected bacteria from several sources —from a light switch to his own belly button— and forced them to grow onto photographic film of images from space. The result was a collection of eerie pictures that form, in the words of DeSieno himself, a “perverse forensic exploration”. To the publication>

3. Odd… but effective! These #AwesomeMicrobes can exploit rocks to obtain energy 🦠 Now these researchers have shed light on how these #bacteria do this! 👇

Bacteria are one of the most adaptable living creatures on Earth. Name the harshest and most isolated environment and there will more than likely be a microbe species that can thrive in it. For this reason, bacteria feature many different strategies to obtain energy… and some of them aren’t very orthodox. This is the case of  Shewanella oneidensis, a bacterium that can survive by “breathing” rock! These skilled microbes use membrane extensions that act as electric wires. S. oneidensis bacteria use these structures to get rid of the electrons generated as waste in the process of getting energy — which can kill the microbe if it keeps them. Creative solutions like this allow bacteria to live almost everywhere! To the publication>

4. #Bacteria can be a good friend of babies! 🦠👶 Microbes living in the mother’s gut may protect the newborn from food allergies! 👇

As adults, our bodies are inhabited by many different kinds of microbes. These microorganisms play a key role in our health, for example by helping us to digest food and by making essential nutrients for us. Newborns obtain their own microbiome from the mother’s bacteria when they pass through the birth canal and they are important for the correct development of the baby. Now researchers have found that maternal microbes may be important even before birth! The gut bacteria species Prevotella copri transforms the fibre acid from our diet into fatty acids. Scientists checked for the presence of this bacterium in the stool of newborns with and without food allergies, and also in the stool from their respective mothers. They found that the presence and abundance of P. copri was associated with a decreased risk of food allergies. Bacteria can benefit our health in many different ways! To the publication>

5. #Bacteria are stronger than they seem! 🦠🏋️‍♀️ In this study, these microbes have shown they can carry cargo five times their own size! 👇

When our ancestors had to move heavy objects, they relied on the strength of animals like horses or oxen. This way, they could carry out hard work such as tilling the land. If we move to the microscopic world, bacteria may take over the task! These microbes are stronger than it may seem, especially when working as a team. However, the jets of bacteria that could be useful to move cargo are unstable and can’t be easily directed to the object of interest. Researchers may have found an original solution for this: microscopic tracks! Using liquid crystal, they managed to direct the microbe jet towards microscopic cargo five times bigger than them… and bacteria could carry it out!  While this is a proof-of-concept test, it may be the basis for interesting medical applications in the future! To the publication>

6. No light 💡🚫 Almost no food 🍱🚫 #Bacteria can thrive even in these harsh conditions 🦠👇

Every time that we think we have discovered the limits of where life can exist, a new organism thriving under conditions we’d previously ruled out challenges our vision. And here comes the second-to-last example! Scientists within the International Ocean Discovery Program took rock samples from beneath the seafloor to learn about the historic climate records preserved there. To their surprise, they found life! These researchers revealed a small but diverse population of microbes that were living as deep as 729 metres below the ocean floor! And it is no small deed: there is no light down there, food is scarce, and space is very limited. This study is new evidence that no matter how harsh an environment is, there are probably amazing microbes that would be glad to make it their home! To the publication>

7. Our April’s #AgarArtAward won the Agar Art competition of @ASMicrobiology last year! It pictures a Koi fish with a lotus flower and it is made of nine different #bacteria! 🐠🦠 🧫🎨: Arwa Hadid, Oakland University (USA)

Our April’s #AgarArtAward is an astonishing picture of a Koi fish with a lotus flower. It’s not just beautiful for the art, but also for its biological complexity. In this drawing, nine different bacteria share the same space! For example, the lotus flower is made of Micrococcus luteus for the center of the flower and radiating out of it are petals made of Escherichia coli!  On the other hand, the Koi fish is made of Klebsiella pneumoniae enhanced with Staphylococcus aureus to outline each individual scale. 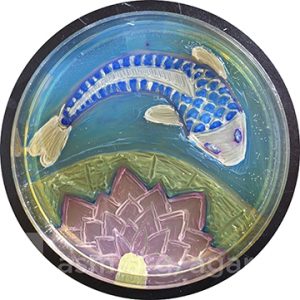 8. These engineered #AwesomeMicrobes may become part of next-generation solar panels! 🦠☀

Many living beings can absorb solar light and transform it into energy to survive, a process known as photosynthesis. Some bacteria can do this using a natural dye called lycopene, which is also responsible for the red colour for tomatoes. Researchers aimed to take advantage of this skill to obtain a clean source of energy by extracting the lycopene out of the microbes, but it was a costly and complex process. As an alternative, instead of extracting the dye, researchers kept it within the bacterial cells and coated them with a mineral that could act as a semiconductor. They then applied the mixture to a glass surface, creating hybrid solar panels!  To the publication> 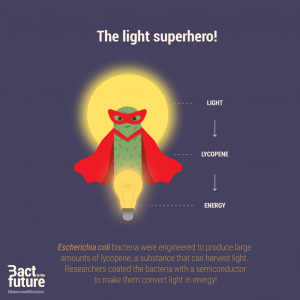 9. These #AwesomeMicrobes would be glad to help you do the chores… but do they actually exist? 🧹🧼 Our #SynbioQuiz is back for you to show how much you know about them! 👇

And the answer is… B! Researchers from the Weizmann Institute of Science identified the genes that plants use for taking carbon from CO2 and turning it into protein, DNA and other biological molecules. Then, they added them to Escherichia coli bacteria and modified some genetic information that these microbes already had. The result were bacteria that could eat carbon dioxide from the environment. These amazing microbes may be important allies to address climate change! 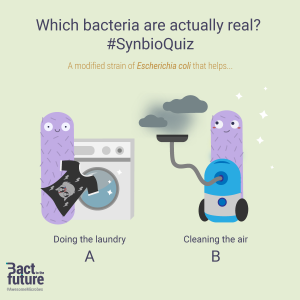 10. Sometimes there is truth behind old legends… and some of them involve #AwesomeMicrobes! 🦠 Are you ready to time travel again? ⌛ Hold on tight, here’s our #BactToTheFuture section!

There is a traditional tale that arose in the times of the US Civil War… and it involves bacteria, so we took our Delorean and time-travelled to Tennessee on April 7th, 1862, to take a look! On that day, the battle of Shiloh just happened and the battlefield was crowded with wounded soldiers waiting for the doctors to arrive. After many hours waiting on cold mud, some soldiers noticed that their wounds were glowing with an eerie blue light. As doctors realised that the troops with glowing wounds were more likely to survive and to recover faster, they dubbed this light as the Angel’s Glow. This story was passed down as a fairytale… until one day, 139 years after the battle, a microbiologist and her son visited the former battlefield, heard about the legend and decided to unravel the mystery! If you want to know more… read our Bact To The Future thread! To the publication> 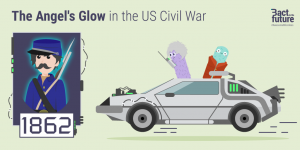