1. Microbial mummy awakens! 🦠💀 Researchers recovered organism samples from the seafloor, deposited up to 100 million years ago – and found they are alive! 🌊

If there is something that surprises scientists about microbes it’s their survival skills. There are some species that are able to grow under extreme conditions, such as heat, cold, high salt concentrations, lack of oxygen… Now, researchers have found that microbes buried beneath the seafloor for more than 100 million years are still alive! Apparently, these bacteria have been growing very slowly all this time, obtaining energy from alternative sources such as radioactivity. This study shows that the limit for life may not be where we thought. Perhaps life could be growing elsewhere in the Solar System, or even beyond! To the publication >

2. Spiderbact, Spiderbact, does whatever a spider can! Spins a web, any size, ‘cause its genes have been modified. Look out! Here comes the Spiderbact! 🎶🕷️🦠

Beyond Spiderman’s use of spider silk to defeat his enemies, this valuable material has thousands of different applications: tear-resistant clothing, automobile parts, aerospace components, implant devices, drug delivery systems… These amazing threads, called draglines, are extremely strong, tough and lightweight. Moreover, they can function in contact with living tissues without any danger, a property known as biocompatibility. However, getting enough silk is difficult, because a single spider only produces a small amount of it. The answer to the problem could be bacteria! A research team from Japan has produced spider silk using a marine bacterium, called Rhodovulum sulfidophilum. Scientists genetically engineered the bacterium to produce the main component of the dragline, the MaSp1 protein, and they fed it with seawater, bicarbonate salt, nitrogen gas, yeast extract and light, which are really easy and cheap to obtain. The result was efficient silk protein production, making the microbe a promising green and sustainable factory of spider silk and other valuable products! Here comes the SpiderBact! To the publication >

3. What your spacesuit really needs: fungi! 🧫 Microbes that can eat radiation could be used to protect future @NASA astronauts 👨‍🚀👩‍🚀

Sending astronauts to Mars might be closer than we think! However, before it happens, we have to overcome many technical challenges. One of the most serious ones is protecting astronauts from radiation, so scientists have been looking for solutions. Surprisingly, fungi might have the answer to this problem. There are some types of fungus that are able to grow in one of the most radioactive places on Earth: inside the destroyed reactors of Chernobyl Nuclear Plant. Notably, they have the ability to absorb radiation and to convert it into energy for their own use. This probably led researchers to think: “Why don’t we use these amazing species to protect humans?” And that’s exactly what they’re trying to do! Experiments have shown the possibility of carrying the fungi to Mars and cultivating them on a shield structure that, perhaps, could offer a layer of protection. The answers to our challenges can often be found in the most inhospitable places on the planet! To the publication >

Microbes are able to grow in the most unexpected places on Earth: inside the human body, under the sea, in a volcano crater, in the glaciers of Antarctica… even in the sky! Yes, you read that right! There are microbes that are swept into the air and then settle in the lower parts of the atmosphere. What’s more, these lifeforms, that include bacteria, viruses and even fungi, create microbial highways in the sky that transport them across the world. Therefore, understanding the atmospheric microbiome might help us to learn about the processes that happen up in the sky, such as cloud formation, and even how disease-causing microbes are transported around the planet. There is still a lot to discover about the tiny life forms above our heads! To the publication >

5. Siblings usually look alike, as they share their genes, but Staphylococcus aureus begs to differ! This bacterium manages to change its genetics and make itself unique 🧬🦠

There is a constant fight between our immune system and pathogenic bacteria that want to enter our body.  Up to now, there was something that worked in our favour. When bacteria reproduce, a mother cell divides into two daughter cells that are genetically identical to the mother and between them. They are clones! This fact can be adverse for bacteria, since genetic variability is necessary to adapt to environmental changes and, therefore, to survive. Now, scientists from Germany have discovered that some infectious bacteria can double or multiply certain sections of their genetic material, producing genetic variants among sibling cells. This gives the bacteria new capabilities to respond to human immune cells and to antibiotics, making them more dangerous for our health. Understanding these processes is key to win the fight! To the publication >

6. #Synbio chicken wings, please! KFC, along with a Russian research team, is trying to create 3D-printed nuggets made from cultured meat 🧫 🍗

Until now, scientists knew 3D printing can be useful in fields such as medicine, architecture and electronics, but only a few had thought about its applications in the food industry! Kentucky Fried Chicken and the Russian company 3D Bioprinting Solutions have done it, and they share a goal: vegan 3D-printed chicken wings. It may sound crazy, but researchers are taking chicken cells from a sample of flesh, multiplying the cells in the lab to create a paste and 3D-printing it into cubes to be seasoned and delivered to restaurants. The “meat of the future” will be more environmentally friendly and healthier for us. Moreover, it might even allow stable food provision for the growing global population. The future of fast food is here! To the publication >

7. Bacilli are able to do many things for us – but not all! Which one of these #bacteria could you find in real life: bacilli protecting computers from viruses or protecting art from deteriorating? 🖥👩‍🎨 Vote now in our Bacterial Quiz! 🦠

And the answer is…B. In August, our Bacterial Quiz returned! And we have good news: most of our followers were correct, bacilli can protect art from deteriorating. Scientists found these #bacteria in a 17th-century painting by Carlo Bononi. They discovered that there are some microbes that play a central role in degrading paintings, called pigment-eating microbes. However, there are others that may help us save them. The spores of some bacilli bacteria are able to counteract the growth of bacteria and fungi involved in deterioration. As you can see, the number of things that this bacterial species can do for us is enormous! To the publication > 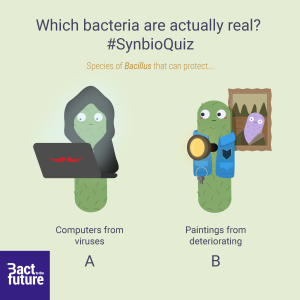 8.“Everyone is an artist”, according to Joseph Beuys. He might not have been referring to these #bacteria, but they are ready to join in! 🦠🎨

We’ve already told you about bacteria that protect paintings from deterioration, but there are also others that can protect statues and monuments from the same phenomenon. These little artists can produce calcium carbonate, a compound that seems to successfully protect several stone structures! To the publication > 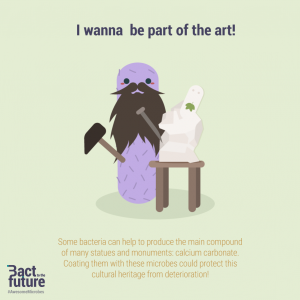 9. This month’s #AgarArt Award shines by itself! 🎨 Check out these intricate designs made by Brett Russell #SciArt #bacteria

Our Agar Art Award this month goes to our little buddy E. coli. These bacteria can be engineered to produce fluorescent proteins, and luminescence can be used for many diverse tasks in the lab. The artist Brett Russel has thought about a new application. Art can be expressed in unimaginable ways! To the publication > 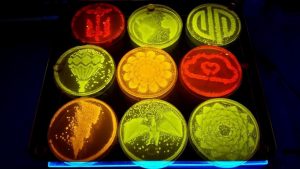 10. Healthcare, food, energy…there are a lot of fields where #synbio can make the difference 🧬 What about architecture? This time, we time-travel to the future to have a glimpse of how this field could change our homes 🏡 Hold on to your seats!

This month, we travelled to the year 2100 and we realized how our neighbourhoods had changed thanks to synbio: living buildings that can heal themselves made of bacteria, fungi that repair pavement cracks, and other synbio applications that are used to build… even on the surface of Mars! But the innovations don’t stop here. In the 22nd century, we also use algae to cover buildings and convert sunlight into heat, and they are even used as lamp posts thanks to their bioluminescence. No electricity needed! Of course, we’re just guessing, but these examples are already being studied in our time! Will synbio shake up the architecture of the future? If you want to know more… read our Bact To The Future thread! To the publication > 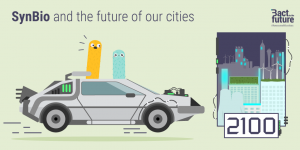