1. Punk is not dead — it just turned eco-friendly! Scientists have developed a new leather fabric with no plastics or animals involved, only #fungi! 🕶️🍄

Until now, we´ve had two ways to make a leather jacket: One involves using animal tissue, which consumes energy, produces waste and involves animal suffering and the other uses synthetic fabric that emulates leather – but making it requires plastic, and this material is one of most threatening pollutants. Luckily, there is now an ethical and eco-friendly third option: sheets of woven fungus! These can be grown over a couple of weeks on almost any organic substrate one can imagine! Moreover, fungi have different properties which make them the perfect material for customization so, maybe, fungal leather products will pop up everywhere in the near future. Is there anything fungi can’t do? To the publication >

2. Hannibal the bacterium 🦠 These “tiny terrors” are eating much bigger #bacteria from the inside! 😦

If we ask you to think about a predator, you may come up with lions, sharks or tigers. But there is also a much smaller predator that is just as ferocious and unknown to most people. Its name is Halobacteriovorax, a predatory bacterium that eats other bacteria from the inside. It punctures its prey’s exterior and begins to bore the inside, where it will eat its host´s innards, clone itself many times and burst free to find its next meal. It sounds terrible but, in the future, these bacteria could help us fight harmful microbes present in the environment, or eliminate pathogens from the food supply. They may be useful as a therapy against antibiotic-resistant bacteria too!. Researchers are now figuring out how these killer microbes select their prey. Bacteria never fail to impress! To the publication >

3. Synthetic salmon meat gets to the testing phase! 🍣🧫 @wildtypefoods is preparing to send a first batch of these lab-grown salmon to selected chefs 👩‍🍳

Drug production, energy sourcing, waste treatment and now… food! Synthetic biology is taking over the world by storm and soon you may be able to enjoy delicious dishes such as lab-grown salmon! The startup Wildtype is sending a first batch of this engineered salmon meat to selected chefs who want to incorporate this product into their menus. The company has developed its own technology to grow muscle tissue and fats to replicate the taste and texture of wild salmon. This way, they have reduced manufacturing costs and made the product less harmful to the environment than regular salmon meat. Synthetic biology is changing the way we eat -are you ready for next-generation food? To the publication >

4. Early bird #microbes! These scientists have engineered E. coli #bacteria to start manufacturing when they turn on the lights! 💡

Thanks to synthetic biology, it is now commonplace for researchers to engineer microorganisms to produce compounds of interest, often in high quantities. However, when scientists engineer a bacterium to obtain a product, they add a chemical that triggers the reactions that produce the interest compound, as an excessive production can affect the microbe. But this method has some limitations: for example, removing these chemicals from the final product can be difficult. To overcome this issue, researchers have now engineered Escherichia coli to produce biofuel and control its production by switching the lights on and off! In addition, the light also allows scientists to control where the reaction occurs. For some microbial magic, all you need is illumination! To the publication >

5. What would #microbes like to eat? – Petroleum 👨‍🍳 This engineered #microorganism produces artificial silk from plastic waste 🦠

The increasing accumulation of plastic waste threatens to pollute almost every corner of the planet: each year, tens of millions of tons of this material are sent to landfills, and another eight million metric tons end up in the ocean. That’s why eco-friendly alternatives to plastic have become an urgent need. Once again, bacteria may be the solution! Researchers are engineering microbes that “eat” plastic waste and then use the energy obtained to produce artificial silk, a biodegradable protein that can behave like traditional plastic. This is just another example of how synthetic biology can address current environmental issues! To the publication >

6. #Bacteria living in our bodies are much more than just tiny guests! 🦠 Thanks to #SynBio, gut #microbes can detect intestinal inflammation 🔍🩺

Our bodies are inhabited by many different kinds of microbes. These microorganisms play a key role in our health, for example by assisting us in digestion, producing vitamins and protecting us from pathogens. Now, thanks to synthetic biology, these microbes could also diagnose Inflammatory Bowel Disease (IBD), a condition where the gastrointestinal tract experiences chronic inflammation. Researchers have engineered Escherichia coli bacteria to emit a fluorescent signal when it detects nitrate. This bacterium uses nitrate for breathing in the absence of oxygen. However, nitrate is also produced as a result of intestinal inflammation! This way, physicians may be able to diagnose IBD with a non-invasive procedure that doesn’t cause pain. Bacteria are once again showing us their potential as allies of medicine! To the publication >

7. Today in Extreme Engineering… #bacteria! 🦠 Which of these #microbes could you find in real life? 🏗️ 🚀 Vote now in our Bacterial Quiz!

In October, our Bacterial Quiz returned and most of you were correct: there are some bacteria that can produce building materials that live and multiply! Researchers have found that cyanobacteria absorb carbon dioxide gas and make calcium carbonate – the main ingredient in limestone and cement. Further, they have grown these green microbes along with sand and gelatine. The calcium carbonate mineralizes the gelatine and binds it together with the sand, obtaining a self-healing brick. Such structures may be able to heal their own cracks, suck up dangerous toxins from the air or even glow on command!. In addition, they may become a sustainable alternative to current materials whose production generates nearly 6% of the world’s annual emissions of carbon dioxide. Nature has figured out how to do a lot of things in a clever and efficient way, we just need to pay more attention! To the publication > 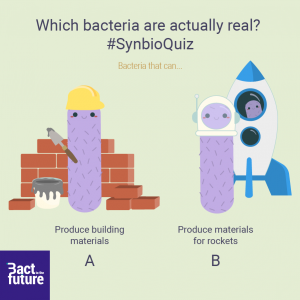 8. This year, the gene-editing tool #CRISPR has been the protagonist of the #NobelPrize for Chemistry ✂️🧬 But CRISPR has its origins in a salt lake, a sharp scientist and some odd #bacteria 👨‍🔬🦠 Get ready for our #BactToTheFuture thread! 🧵

This month, our Bact To The Future thread was back! We time-travelled to the year 1993 and witnessed the discovery of the CRISPR system, the basis of the gene-editing tool for which the Nobel Prize for Chemistry has been awarded this year. What you don’t know is that microbes and serendipity are among the protagonists of this story!. Read our Bact To The Future thread and find out how a tenacious microbiologist accidentally discovered something that would revolutionize biology years later! To the publication > 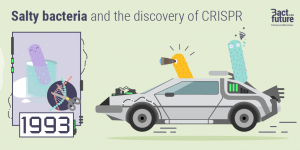 9. This romantic fairy-tale painting is a combination of four different microbes 👩‍❤️‍👨 🦠 It won the third place in the @ASMicrobiology’s #AgarArt competition in 2017, and it is our #AgarArtAward of October! 🎨🧫

Microbes can also dance, and our Agar Art Award of this month proves it! This astonishing piece of microbial art by Ani Tsitsishvili, a student of Georgia’s Agricultural University, pictures this romantic couple using bacteria from the artist’s own skin and the air. The common skin microbe, Staphylococcus epidermidis, is responsible for the white color; Rhodotorula mucilaginosa, common in milk, soil, and air, makes pink; Micrococcus luteus, frequently found in soil, water, air, and skin, is responsible for the lady’s luscious yellow locks; Xanthomonas axonopodis, a pathogenic plant microbe, makes green and combinations of these microbes make up everything in between. Love is the air…and in our skin! To the publication > 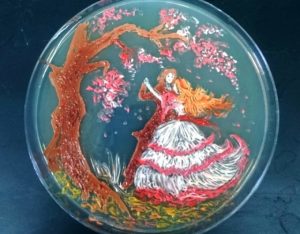 This month’s Awesome Microbes are mystery lovers! For decades, people have written secret messages in invisible ink which could only be read under certain light or after reaction with certain substances. Now, scientists have come up with a way of encoding messages in the colours of glowing bacteria!. This system involves seven strains of our friend E. coli, each one engineered to produce a different fluorescent protein and to resist a specific antibiotic. The right combination of light and drugs works like the key that unlocks a hidden message! To the publication > 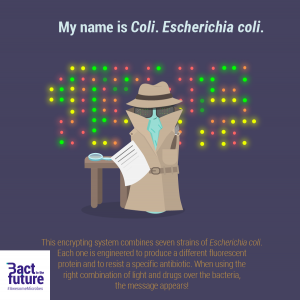