In the same way that computers save information in binary code, cells store theirs in a 4 letter code – G,A,T and C, which are the abbreviations of four molecules: guanine, adenine, thymine and cytosine. These four letters combined are part of DNA molecules, which act as “encyclopedia volumes” of genetic information -in a cellular scale, of course!. DNA can store a great amount of information in a minimal space, so scientists have thought about exploiting this molecule in the same as we use a USB memory! However, current protocols for using DNA as a data storage molecule have key limitations that makes them impractical. Now, researchers from North Carolina may have a solution for this! They have developed a new method to work with DNA sequences that allows them to access information in an easier way. They call it DORIS, and they are currently working on its optimization for extended use. We really hope this DORIS doesn’t suffer from any memory loss! To the publication >

2. Don’t throw that old bread away! 🍞🥖 These #microbes can turn it into lots of useful compounds

Every day, tons of unsold bread and baked goods go stale and are no longer edible. Part of them are used to feed livestock in farms, but there is still plenty of this “food waste” that needs to be managed. Now we may have a solution thanks to one of our microbial friends! Scientists in Turkey have found bacteria that are able to turn stale bread into a useful chemical compound. The bacterium is Pseudomonas reptilivora, and it transforms the glucose of baked leftovers into a substance called 2KGA. This molecule has multiple industrial and alimentary uses: as a detergent, in vitamin production, as cement plasticizer… and the list goes on and on! Researchers are still working on this innovation, but with the help of organisms like this one, we hope to become a waste-free world! Little by little – or at least microbe by microbe! To the publication >

3. Mustard-oil byproducts to wash your clothes? 🌾 These researchers are putting agricultural waste into good use

Besides baked waste, there are many other food leftovers we must take care of. For example, in mustard-oil production. It is a prominent ingredient in Indian cuisine and it is also used in massages or cosmetic products. Its extraction from mustard seeds produces a waste byproduct called oil cake, and biotechnology has just found a sustainable role for it: detergent production! Researchers from the UK and India have found a way to feed bacteria with these oil cakes and get an enzyme detergent as a result. This kind of cleaner is becoming very popular as it is less harmful to the environment and more efficient than the common phosphate-based ones. Scientists are now trying to scale up the process for its commercialization. This is a kind of “dirty washing” we can encourage! To the publication >

4. Something is cooking!🍳 Healthy and eco-friendly flavours made by biotechs!👨🏼‍🔬

Sugar, spices and everything nice! There are some flavours and fragrances that have become almost essential in our everyday cooking: vanilla, cinnamon, ginger, cumin… You have plenty to choose from! However, most of these compounds come from natural sources that are at risk of running out. Moreover, some processes involved to obtain them can be harmful to the environment. Luckily, in our search for sustainability, biotechnology stands by our side! Using bacteria as factories, researchers are able to produce flavourings in a cheaper and environmentally friendly way. They can even modify the final product to create a healthier version of the compound! The food industry is not their only goal, they also have their eye on cosmetics and colognes. Microbes are ready to spice up not just your dinner but your life! To the publication >

Since scientists discovered bacteria living in our guts, they have slowly unravelled their interaction with our vital functions. Researchers have found how they can contribute to our defence against pathogens and help us digest nutrients. But could these little organisms go beyond these functions? That’s what scientists from Massachusetts have discovered, not in humans, but in worms! Apparently, worms that have a certain kind of bacteria in their guts may have their eating habits modified by them. These microbes could sense other bacteria in the environment and release compounds that encourage or hinder the worm to intake these bacteria. Could you imagine what your bacteria would want you to eat if they had that power? To the publication >

6. After a century-long effort, the search has come to an end! 🔬Researchers discover bacteria that are able to eat manganese to produce energy. 🦠

Suspicions confirmed! Bacteria found guilty by researchers for the manganese clogging of water pipes. These microbes, which have been avoiding getting caught for years, have finally been identified. Apparently, oxidation of manganese is a reaction these bacteria are using to promote their growth. Manganese oxides are the byproducts of their metabolism which accumulate and cause the pipe obstruction. This process could be the explanation of the manganese oxide nodules that can be found in some seafloors, which contain rare metals of industrial value within them. But, before they can be exploited, scientists must figure out their origin, so that no irremediable harm to the marine environment is done. These newly found bacteria in water pipes are the main suspects in the matter. Further investigation will tell if they are found guilty too! To the publication >

7. Are we turning into little microbial islands?🦠 🏝️

For many of us, this last lockdown has changed some of our habits. You may have grown closer to you balcony neighbours, or may have gotten rid of pants for work. But your everyday activities are not the only ones affected by the isolation: your body ecosystem may have changed too! In pre-pandemic times, microbes inhabiting our bodies were constantly being exchanged between people. This creates a flow that, whether harmful or beneficial, keeping us all connected. Now that our bacteria are as quarantined as we are, the flow has stopped, and they are evolving their own way for each one of us! When a species ends up in different unconnected locations, as different islands, an evolutionary drift starts separating populations until they are established as different species. It would take years of lockdown for our bacteria to become irreconcilable with each other, but the process is not unheard of. Researchers are now studying the beginning of this drift in our bacteria, and which of our populations are being the most affected by it. Check out this article if you want to know more! To the publication >

8. The lockdown has taken its toll on everybody… 🦠 Who can relate? ☝️

For some of us, the lockdown has been an opportunity to get that workout routine we always state in our New Year’s resolutions. But for others, being confined has brought out our best culinary skills – especially in bakery! You can guess which scenario has happened to our little bacillum friend here… How has this lockdown treated you? Are you in a bacillum to coccus conversion or the other way round? 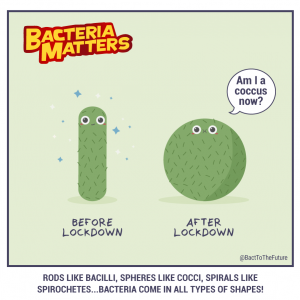 9. Our own tiny cardiologists live in our gut! 💓 Check out how these #AwesomeMicrobes take care of you!

The connection with our microbes goes deep into our hearts – literally! This month’s Awesome Microbe is a bacterium that lives in our gut but whose effect goes beyond the digestive tract to our circulatory system. As its name is not known yet, does it count as blind love? 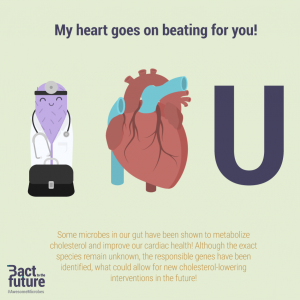 10. Much more than tiny companions! Our gut microbes could help doctors diagnose diabetes! 🦠🩺

Sleeping at night and waking up in the morning is an example of a circadian rhythm: a process repeated daily and coordinated mainly by the amount of light in the environment. Other examples are our coordination peak at noon or a lower body temperature during the early morning. We now can add another process to this list: our gut microbes! Scientists have found that the population of some bacteria, like the ones inhabiting our gut,  may also change during the day following a circadian rhythm. Moreover, the disruption of this cycle can trigger health disorders! For example, this research found a correlation between the loss of daily patterns in gut bacteria and type 2 diabetes. These changes could be used as a diagnostic factor for diabetes detection. There may come a time when your doctor will ask “How are you feeling?” to your bacteria instead of you! To the publication >