1. This bacterium will self-destruct in 30 seconds! 💣 Scientists have developed a new mechanism that instructs engineered #bacteria to die after carrying out their task 🦠

If there is one thing that all living beings share, it is that we all want to stay alive. That is why programming an organism to self-destruct is one of the biggest challenges for synbio. Making an organism kill itself may sound shady -to say the least!. However, this mechanism may be the solution to one of the main concerns of using genetically engineered organisms: the unexpected effects of their release to the environment. That’s why a scientist from the US is working on a “kill switch” that tells engineered microbes to die after they have carried out the task for which they were designed. For example, there are some modified bacteria that can destroy pathogens in the gut of livestock. When released from the animal gut, these bacteria are set to experience a temperature downshift, and this change could be used as the signal for their suicide. This “self-destruct button” may prevent future environmental disasters when working with engineered organisms  To the publication >

2. Yeasts 🆚 bacteria! Scientists have engineered this #microbe to produce antibodies to fight a bacterium responsible for severe infections in elderly people 💪🦠

Fighting one microbe with another! The enemy here is a bacterium called Clostridioides difficile which is responsible for severe colon infections that kill thousands of people every year. This pathogen occurs most often in elderly people, especially those receiving antibiotics. This makes patients vulnerable to infection from this bacterium’s spores. Also, once inside the, C. difficile is difficult to kill. Now, scientists have modified yeast to produce and deliver antibodies against the bacterium’s toxins, and preliminary results in mice models are very promising. Maybe, in the future, patients will be able to fight this pathogen just by taking a “yeast pill”! To the publication>

3. Spacefaring #bacteria! 🚀🦠 A year in space is no walk in the park, but these mighty microbes have been able to bear it!

Some bacteria can survive in the most inhospitable places on Earth… and perhaps even beyond!. This is what scientists discovered after finding a bacterium still alive and kicking after living for a year on a platform outside the International Space Station, where conditions are similar to the ones in the naked space: high UV radiation, vacuum, extreme temperatures fluctuations and microgravity. Researchers wanted to investigate why this bacterium, called Deinococcus radiodurans, is so good at surviving in these extreme conditions, so they took this microbe back into space. Now, one year later, scientists can better understand how life can exist beyond Earth. This likely will become more and more important as humans begin to travel further from our planet! To the publication >

4. Mayday! 🚨 Iron levels are decreasing! 📉 Some plants send emergency signals to #bacteria living in their roots for their assistance in producing this nutrient 🌿❤️🦠

Just as there are bacteria living in our bodies, plants are awash with these and other microbes that play essential roles in their growth and protection against pathogens and insects. Now, scientists have discovered that these little allies are also key in helping plants obtain iron, a crucial nutrient that they often struggle to obtain. When iron levels are low, plants respond by secreting compounds that bacteria can detect. Then, bacteria use soil iron, which makes it easier for plants to take this nutrient up. This discovery may help substitute synthetic fertilizers, increase agricultural yields and boost the nutrient content of staple food crops. Bacteria can help us in many ways, we just have to let our imagination fly! To the publication>

5. Ants and #bacteria have a beautiful relationship 🐜💕 🦠 These insects select nesting sites assisted by soil #microbes that prevent ant-infecting fungi from growing 👇

Living in nature can be a challenge for the little ones. This is the case for insects living in soils, such as ants, which are at risk of pathogen infection. So, they have developed a few strategies to reduce this danger. Once again, bacteria are helping in this task. A new study shows that when choosing nesting sites, ants choose places where actinobacteria grow to try to evade pathogens. These microbes produce compounds that inhibit the growth of pathogenic fungi while also producing volatile substances that ants can detect. This finding may pave the way to new strategies using bacteria to fight invasive pests that cause great economic losses and ecological problems. Is there anything bacteria can’t do? To the publication>

6. Fighting Alzheimer’s disease with #bacteria! 💪 Scientists have discovered that these microbes produce a compound that may be useful to treat this condition! 🧠🦠

Microbes are experts in drug production and once again they have proved it! This time, the innovation comes from microorganisms living around plants’ roots that have much to offer in the search for new drugs. Now, scientists from South Korea have identified a natural substance produced by a bacterium called Streptomyces that grows near the root zone of ginseng plants. The substance, called rhizolutin, may be helpful to tackle one of the molecular features behind Alzheimer’s disease. To the date, there is no effective treatment available for this condition, but this may change in some years thanks to… bacteria!  To the publication >

7. #Bacteria mark the spot! 💡 These #AwesomeMicrobes can detect buried landmines 💣🦠

Regretfully, more than 100 million landmines remain hidden in the ground around the world and they injure around 20,000 people each year. Therefore, a safe and efficient way of detecting them is an issue of global importance. These glowing bacteria may help us find them! Scientists have engineered a bacterium called Pseudomonas putida to emit fluorescence when they come into contact with explosive vapours emitted by landmines. This signal can be recorded and quantified from a remote location without risk. Our #AwesomeMicrobes of this month can save lives! To the publication> 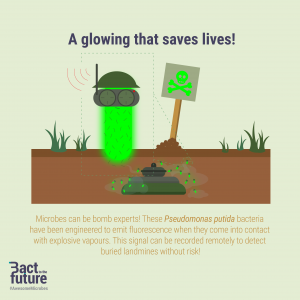 We’ve already told you about bacteria that help ants to survive, but there are also microbes that help other insects such as leafhoppers. These Awesome Microbes produce a waterproof substance that makes the insect’s body water-repellent and anti-reflective. This amazing skill may help us to obtain new materials for rainy winters! To the publication> 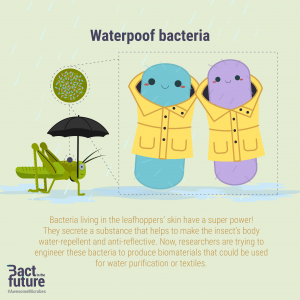 9. When microbiology becomes architecture! 🏗️🧫 Our #AgarArtAward of November doesn’t come in 1 petri dish, but in over 200! @MathildeNordga1 does this stacking of plates when she needs to dry them quickly and see how cool it is! 👩🏼‍🔬 We can find art everywhere! 🎨

In our AgarArt section we normally show some beautiful pictures created using microbes, but this time we bring you something very different and awesome! Mathilde Nordgaard, a PhD student from Denmark, does this stacking of plates when she needs to dry them fast and in large amounts! Look at the amazing figures she creates! The laboratory can be a place for artistic inspiration! To the publication > 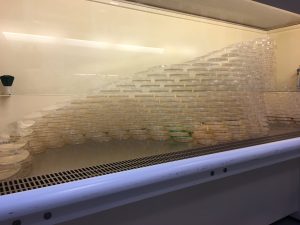 10. Today in #BacteriaMatters… transformation! 🧬 #Bacteria can acquire new capabilities by taking up new DNA molecules called plasmids 🦠 Scientists can transform #bacteria by introducing genes of interest so that they have the properties we want!

Do you think bacteria can have superpowers? It looks like science fiction, but it’s not: .it’s the transformation process! Transformation is the process of introducing a DNA molecule called plasmid, that carries genes that confer new capabilities to the recipient bacteria. For example, producing spider silk. By this process, we can create microbes with the properties we want making them almost superheroes! To the publication > 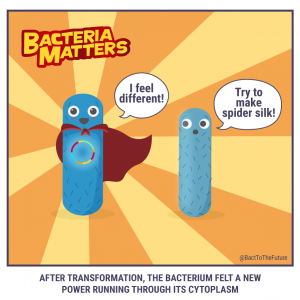