1. Bricks made of #bacteria that can repair themselves? 🧱🦠 #Synbio could be in charge of the buildings of the future! 🏘🧬

We have already heard about self-healing concrete but now scientists have gone a step further and they are building materials that can be grown on-site! A team from the University of Colorado has created bricks using sand, a gelatine-based hydrogel and bacteria from the genus Synechococcus. These microbes grow within the mixture absorbing carbon dioxide from the environment and producing calcium carbonate as a waste product. This substance makes the hydrogel dense, thus binding the sand particles together. These “living” bricks may replace other building materials such as wood but also may help to remove the excess of carbon dioxide from the atmosphere. To the publication>

2. One bacterium spreads across surfaces 🏃‍♂️ The other one hitches a ride on it 🚕 The result: an awesome drawing made by #AwesomeMicrobes 🦠🎬

Microbes are everywhere on Earth, so it isn’t strange that, more than often, many different species have to share the same space. Some bacteria can use this circumstance to their own benefit! Researchers have reported that when Escherichia coli are grown in agar plates together with Acinetobacter baylyi, the E. coli can “hitch a ride” on the first ones. E. coli bacteria can’t move easily through agar, while A. baylyi can crawl readily across it. After 24 hours, the result of the growth of both bacteria is this intricate flower-like pattern. Bacteria can create art even without trying!  To the publication>

3. A #synbio zebra hamburger, please! 🍔 Lab-grown meat could change the way we eat! 🧬😋 And with no animal suffering! ♻👇

Stockbreeding is the second-largest source of global warming emissions, and there is a growing demand in the society of alternatives to reduce the consumption of animal products. For these reasons, industries are looking for a way to replace meat with similar products that don’t involve livestock. Synthetic biology could be the key to achieve this goal! It is already possible to take stem cells from the muscle of a living animal and reproduce them in the laboratory until they form fibres. There are used to prepare meat-like products that can be cooked and eaten. Many companies already offer viable substitutes for beef, pork, chicken and fish, but some others are expanding the catalogue towards more exotic options such as synthetic meat made of zebra or kangaroo cells. This lab-grown meat may change the way we eat!  To the publication>

4. A gut-brain connexion! 🧠 #Bacteria living in your intestine may help to prevent Parkinson’s disease! 🦠👇

There are trillions of microbes living in our gut. These microbes play a key role in our health such as preventing harmful bacteria from growing inside us or helping us to digest food. In the last years, researchers have found that gut microbes also have an influence on mental health conditions such as depression. Now, this new study shows that intestinal bacteria may play a role in preventing Parkinson’s disease! Researchers have found that a probiotic bacterium called Bacillus subtilis was effective in inhibiting the formation of the protein aggregates that accumulate in the neurons and produce the Parkinson’s symptoms. This result may open the door to exploit bacteria to treat Parkinson’s disease in the future! To the publication>

5. In the race for survival, teamwork is essential! 🤝 #Bacteria know that very well! 🦠👇

Bee colonies are organised in very defined social groups. Each one carries out different tasks such as searching for food, defending the beehive or taking care of the offspring. This model allows bees and other insects like ants to maximise their chances to survive. Now scientists have discovered that bacteria like Streptomyces coelicolor also adopt specialized roles within their colonies! Part of the bacterial colony produces antibiotics although this process comes at the expense of their individual reproductive success. This way, they ensure the defence of the colony against other bacterial competitors! For these microbes, union is strength!  To the publication>

6. #Synbio to improve healthcare! 🧬 These engineered red blood cells may become the next drug delivery system! 💊🎯

As blood is in charge of delivering oxygen and nutrients to all tissues, the cells within this fluid must reach all the corners of our body. Researchers have taken advantage of this feature to deliver drugs to specific targets! Using synthetic biology tools, scientists have modified red blood cells so they can be loaded with drugs and used to distribute them throughout the body. The hybrid appears and behaves like a normal red blood cell, so it can attach to specific targets without being attacked by the immune system. This new strategy may be useful to deliver potent drugs against diseases such as cancer or Alzheimer’s disease!  To the publication>

7. This #AwesomeMicrobe can feed on meteorites! ☄🦠 These #bacteria may help us to trace signs of life in the Universe! 👽

Among the millions of different bacterial species, there are some that don’t need to feed on organic matter to obtain energy. This is the case of Metallosphaera sedula, that produces its own energy munching on metals and is able to thrive in some of the most hash conditions on Earth. Such organisms are helpful to explain how was life in the inhospitable environment of a young Earth… and also to search for life beyond our planet. That’s why a group of scientists has decided to see what would happen if they tried to feed M. sedula a bit of a meteorite, and they realised that the bacteria gobbled it up even faster than terrestrial food! This finding opens the door to look for signs of microbial activity on extraterrestrial rocks: if life ever occurred on another planet, similar fingerprints could be still preserved in them! To the publication>

8. Do you like #pokemon?  Do you like #bacteria? 🦠 Well, then you are gonna love the winner of our monthly #AgarArtAward! Gotta catch ‘em all (microbes)!  🎨🧫: Janine McCalder

“Amazing creatures that can evolve and with thousands of shapes and colours” 🦠 If you are a Pokemon fan, then this description will sound familiar to you, but we think bacteria fit in it too! Our winner of February’s Agar Art Award is for these pieces of art by Janine McCalder inspired by Pokemon. Gotta catch ‘em all! 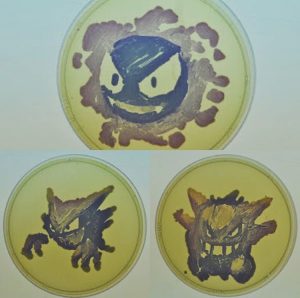 9. Have you ever wondered why #bacteria are grown on agar? Hold on tight and prepare to time-travel! ⌛ On our first #BactToTheFuture section we will visit the moment when a #WomenInScience changed #microbiology forever! 🦠🧬

Almost all bacteria have something in common: they can grow on agar. This substance obtained from algae is the most common choice of microbiologists when they need to isolate bacteria to study them. But how scientists realised that an additive used in bakery to make jelly could be so useful? Well, this amazing story has a woman’s name: Fannie Hess. If you want to know more, check out our Bact To The Future thread of February! To the publication> 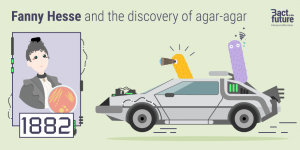 10. Today in #BacteriaMatters… conjugation! Some bacteria can pass circular DNA molecules called plasmids to other bacteria. These microbes use structures called pili to connect with other ones and pass them information!

Even though bacteria don’t have sexual reproduction, they can share genetic information! Some species can connect with other microbes using a tubular structure called pili and send them circular pieces of DNA through it. This is a common way for bacteria to spread genes that confer resistance to antibiotics, for example… although some of them use these mechanisms for other things! 😉 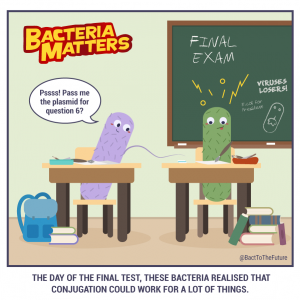