1. Humans have millions of #microbes living in our guts, in our skin… and in our noses! 👃🦠 These “nosy” #bacteria may be protecting us from pathogens! 👇

Every day of our lives we host billions of microbes in our body. Some of them have no effect on us with us, but others do their part and try to help us in many ways! For example, bacteria in our gut can help us digest some food we eat. Or they can provide us some nutrients we can’t produce by ourselves. Knowing this, it didn’t come as a surprise when these scientists discovered that our nose is also covered in bacteria. And this discovery has its origin in a case of inflammation of the nasal cavities! Apparently, having a healthy respiratory tract could be related to having a healthy Lactobacilli bacteria population in it. Read this article and get to know our newly discovered inhabitants, and how they could be helping us. To the publication >

2. Chloroplasts are behind plants’ photosynthesis 🌱 #Synbio and engineering are joining forces to create artificial photosynthetic droplets and produce clean energy ⚡

Let’s time travel a little bit. Get yourself to the time when all known life consisted only of individual cells. At that time, one of those cells was already able to turn sunlight into energy, a process we know as photosynthesis. At some point, another cell came by and swallowed it, but the photosynthetic cell survived within its captor. After some millions of years of evolution, that’s how the first chloroplast was born. Nowadays, these little cell components are responsible for generating the energy that keeps vegetable cells working. Now imagine we could “copy” this energy-producing method, optimize it and produce it at an industrial level. Well, you won’t need to imagine much, because synbio scientists are trying to develop a method to create and exploit artificial chloroplasts! We are going greener than ever! To the publication >

3. Heat-resistant engineered corals: the bold bet of #synbio to save these marine species 🌊🧬

Corals are a good example of organisms living happily with microbes within their body. Healthy corals have a close relationship with a microscopic algae called zooxanthellae. These algae are responsible for corals’ colour, while also functioning as their main food source. Sadly, due to climate change and other processes raising oceans’ temperatures, zooxanthellae are leaving corals, looking for colder habitats. When left alone, corals are foodless, vulnerable and lose their colour, a process known as “bleaching”. Coral bleaching is becoming more and more common, reducing coral populations worldwide rapidly. But the good news is now scientists may be close to stopping it! Their latest idea consists in engineering coral’s algae and making it resistant to warmer living conditions. Synbio saving the day —and the oceans!— again! To the publication >

4. #Bacteria don’t speak, but it doesn’t mean they don’t communicate with each other 🦠📢 This essay about quorum sensing is the winner of the STEM writing contest of the @nytimes 📰 Check it out! 👇

For an organism consisting of just one cell, bacteria keep on giving us a remarkable amount of new things to learn. But along with increasing our knowledge, they also stimulate our creativity. As a proof, we present you this award-winning essay written by a 17-year-old girl about our microscopic friends. The process inspiring this piece is cell communication. Specifically, the way that bacteria know they are surrounded by other bacteria. This is called quorum sensing, and it’s a mechanism that helps them coordinate their actions as a whole population. If you want to know more, let Jenny Mao take you from shinny marine bacteria to a new way of approaching infections treatment through her writing. We love to discover young people share our enthusiasm about microbes! To the publication >

5. How do #bacteria manage to resist toxic metals? 🧪🦠 Find more about this amazing skill here! 👇

One remarkable thing about bacteria is their ability to adapt and survive. That’s how they get to live in the most hostile environments, or resist our strongest antibiotic therapies. Now, a group of scientists have discovered a new mechanism of bacterial adaptation to difficult circumstances: the presence of toxic metals. Bacteria are able to identify these compounds when they enter their cell, and to activate a process that pulls them out before they cause any damage. This skill has attracted researchers’ attention, as it is very similar to the mechanisms that bacteria use to escape from antibiotics. Understanding this process could be key to the development of new antibiotic therapies, and that is the goal of this scientific group! Read the article to learn more! To the publication >

6. These big worms hold a secret within their gut 🐛 The #bacteria that live there can degrade #plastic! 🦠

In the world we live in, one of the main problems we are facing is how to get rid of all the plastic products when they are no longer useful. The accumulation of plastic waste is already producing a heavy environmental cost, so our goal is to find a way to make plastic sustainable. And maybe that way is… worms. A new study shows that giant mealworms, the same we use to feed birds and reptiles, can degrade polystyrene, one of the most common plastics that is used for packaging and for disposable materials. But giant worms have this skill because they carry in their guts a strain of the bacteria Pseudomonas aeruginosa which can eat polystyrene and degrade it quite effectively. This study opens the door to isolate these bacteria and harness their power to get rid of some of our plastic waste. Another option could be releasing billions of worms to do the work. We know what we would prefer! What about you? To the publication >

Every day, synthetic biology brings us closer to science-fiction, as it produces innovations that could have been impossible a few years before. Our example today is the development of biological batteries, combining nanomaterials and an electric-producing bacteria called Shewanella oneidensis. This microbial power source has been one of the aims of nano-scientists for a long time, but it had many difficulties. They needed to create a scaffold that could both hold a bacterial population and conduct the current they produce in a controlled way. Both conditions had never been reached together until now: a group of researchers has managed to create a suitable material and make the battery work! Check out this article to know how they made it! To the publication >

8. Decaf latte extra foam, please! ☕ These #AwesomeMicrobes can use caffeine as food! 🦠

This month we presented you one of our favourite Awesome Microbes: the coffee-addicted bacteria! This strain of the bacterial species Pseudomonas putida can use this substance as an energy source. In fact, one of this microbe’s remarkable characteristics is the astonishingly wide range of food resources it can use! We’ve seen another example of bacteria that can eat “weird” things in this very Top Ten: the plastic-eating bacteria of giant worms. Next time you order a decaf coffee these bacteria may be the ones who make it! 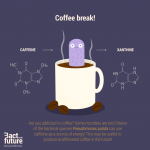 9. Lakes with water so hot that it will kill you if you’d dare go for a swim🌡Permanently frozen lands where no other form of life lives ❄ Will you find #AwesomeMicrobes in these places? Vote now in our Bacterial Quiz! 🦠

In June, our Bacterial Quiz has returned!. This time, the question was whether bacteria could live in blazing lakes or in permanently frozen lands. We have good news: most of our followers were correct! Some bacteria species can be found in these extreme areas. They are generally called extremophiles, as they can live in conditions almost no other being can. We really have some things to learn from these microbes survival skills! To the publication > 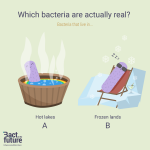 10. Gastritis is a disease that can be treated nowadays… and we have a bold scientist to thank for! How far would you go to prove your scientific hypothesis? 👩‍🔬 Ready to time-travel again? ⏰ Here comes our #BactToTheFuture thread! 🧵

This month we featured a new microbiology story!! This time, we narrated the Nobel-winning tale of Barry Marshall and Robin Warren. These two scientists went as far as they could to prove their hypothesis… even risking their own health! That’s commitment! They challenged everyone who thought them wrong and now, thanks to them, gastritis is a treatable disease with a known cause. Here’s to them!  Get the full story in our Twitter thread. To the publication > 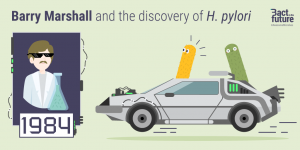