Currently, less than 1% of the total fresh water in the planet is available for human use and, of this, up to 70% is used for agriculture worldwide. Among all crops, rice is one of the most water-intensive, and also one of the most widely consumed. As the planet population is expected to keep growing, the demand for food and fresh water will increase and thus, there is a pushing need to find a balance in this matter. Researchers may have found the key in the largest water mass in our planet: the sea. Rice can’t grow on seawater due to its high salt content, but synthetic biology tools could change this by modifying rice genome to make it resistant to this feature. Maybe we will see floating rice farms in the future! To the publication>

2. #Microbes around us produce a rainbow of colours! 🌈 The Microbe Crayon Project of @AnneAMadden shows us that these tiny beings make our world colorful! 🖌🦠

Microbes are everywhere and, unless we use a microscope, invisible for our eyes. However, sometimes their presence gets noticeable: a bluish stain growing on an orange, the green mould growing on the rocks… The microbes around us naturally produce a rainbow of colors! To show us the wide range of shades that these tiny beings can show, Ph.D Anne A. Madden has assorted 48 different crayons and has relabelled them with the names of the microbes that create this biological palette. You can find here from the black of Aspergillus niger, a fungus that produces vitamins for us, to the pink of Methylobacterium mesophilicum, a bacterium that produces antibiotics. Microbes help to make our world colorful! To the publication>

3. This parasite is killing honeybees 🐝 Scientists are engineering #bacteria to live in the gut of this insect so they can survive! 🦠

In the winter of 2018, US beekeepers noticed a worrying increase in bee deaths. Among the list of factors that produced it, there are two of them that are closely linked: varroa mites and the deformed-wing virus. These mites are bee parasites that are becoming resistant to traditional pesticides and they carry the virus within and pass it to the hosting bees. Now, a team of researchers have engineered part of the bees’ microbiome to produce a chemical that causes the death of both the mites and the virus! They picked one bacterial species that lives in the honeybee’s gut and genetically modified it to produce a double-stranded RNA that increases the chances of the mites to die! This could “bee” the medicine that saves these insects! To the publication>

4. This bandage is green 🟢 when you apply it… it turns yellow 🟡 when it detects #bacteria and turns red 🔴 when it starts releasing antibiotics! 🩹👇

When we have a small wound, a common action step is to put a bandage on it. Normally, the body defences will be enough to fight any possible pathogen trying to sneak through the open wound and, after some days, it will be healed. But, if we are unlucky and drug-resistant bacteria have landed in our wound, things can get worse very quickly. When dealing with a multi-resistant infection, time is gold for doctors so they can act and prevent the pathogen to thrive within the patient’s body. This smart bandage could be useful to detect these infections fast enough! At first, when you apply it on a wound, the bandage is green. If it detects a bacterial infection, the bandage turns yellow and starts releasing an antibiotic to fight the infection. However, if the bandage senses the presence of drug-resistant bacteria, it turns red. This smart resource could help to cut the time between the infections forms and the beginning of the treatment. To the publication>

5. The coating of LED lights contains minerals that produce toxic pollution when extracted from the mines 💡 Now this #synbio project wants to change them for proteins made by #bacteria! 🦠

Light-emitting diodes, or LEDs, stirred up the bulb market when they appeared. They are considered more eco-friendly as they are more efficient than traditional bulbs. However, LEDs present a main disadvantage: they need a special coating that often contains rare earth minerals. These substances are expensive and produce toxic pollutants when mined. Microbes could help overcome this limitation! A EU-funded project called ENABLED has been launched to produce LED coatings containing fluorescent proteins made from bacteria. The starting goal is to have a device that lasts for at least 1,000 hours. Let there be (bacterial) light!  To the publication>

6. Some #bacteria can munch on oil spills 🦠🛢 But why are they attracted to this substance? 🏃‍♂️ Read this article to know more! 👇

Microorganisms aren’t picky when it comes to food: for whatever material that you can imagine there is a microbe out there that would be happy to munch on it, even on oil spills! Some bacteria can naturally use the hydrocarbons in fuel to obtain energy… but the ocean is a huge place. How can they be attracted to the “feast”?  A group of scientists discovered that the surfactant used to reduce the size of the fuel stain may play a major role in this. The addition of these substances may create a hydrodynamic phenomenon that causes microbes to gather in even greater numbers! This could be of great help in case of oil spill catastrophes! To the publication>

7. Two seasons fighting for the land… and two microbes struggling to get nutrients! ☀❄ This beautiful piece of #AgarArt won the @asmicrobiology’s AgarArt in 2018 and it is our #AgarArtAward of March!  🎨🧫: Ana Tsitsishvili, Agricultural University of Georgia

The Agar Art Award of March is a picture of what happened this month: the clash of two seasons, winter and spring! But it is also the race for survival of two microbes, struggling to win all the space and the nutrients. This amazing Agar Art made by Ana Tsitsishvili, from the Agricultural University of Georgia, was the winner of the American Society for Microbiology Agar Art contest of 2018. The winter was made using Staphylococcus and Bacillus mycoides; flowers are made of Serratia marcescens, and the spring is a combination of Micrococcus and Rhodotorula bacteria. 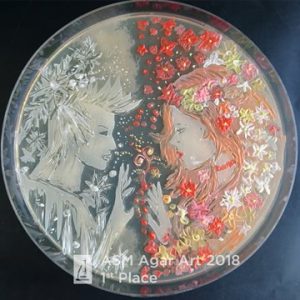 8. Do you like the smell of the earth when it rains? ☔ Well, you have these #AwesomeMicrobes to thank for! 🦠

The pleasant aroma that we can smell after a storm is called petrichor and it has a microbial origin! Awesome microbes called Actinomycetes release a substance known as geosmin when they produce spores for reproduction. When it rains, water drops disperse the spores along with the geosmin and also carry away oils secreted by plants. The combination of both is what creates that particular smell! 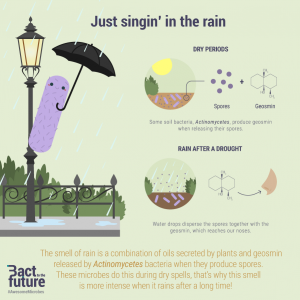 9. Ancient alchemists wanted to create gold 🧙‍♂️ These #AwesomeMicrobes can actually do it! 🦠🥇

Back in the 16th century, many alchemists were obsessed with finding the philosopher’s stone, a legendary substance capable of turning metals such as mercury into gold. What they didn’t know was that there is a living being that is actually able to make gold! The bacterium Cupravidus metallidurans can transform toxic gold compounds into harmless metallic gold atoms. This “alchemistic” skill allow these microbes to live on (and make bigger) gold nuggets! 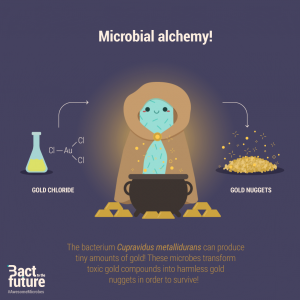 10. #Bacteria also have to deal with their own viruses! 🦠 And they know very well how to avoid infections! 🏡 #StayHome

In these hard times that we are going through, the microbes of our Bacteria Matters have it crystal clear: the best way to be safe from a virus is staying home! After all, bacteria also have their own virus, called bacteriophages, that selectively infect these microbes in order to reproduce. So, be like bacteria: stay home, stay safe! 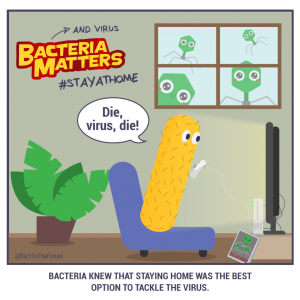