1. They are invisible to our eyes… but #AwesomeMicrobes do a lot for us! 🦠 Here you have some good examples! 👇 #bacteria

If you think about the word “bacteria”, the first thing that may come to your mind is a combination of terrible illnesses and rotten food. But bacteria and other microbes play a key role in our world! For example, bacterial species like Rhizobium help plants obtain nitrogen, a vital nutrient for their growth. And this isn’t the only benefit that these tiny beings deliver! Some fungi species create valuable substances such as antibiotics which have saved millions of lifes, and certain bacteria living in our gut contribute to our health producing vitamins and other nourishing substances. In case you need more reasons to love microbes (we don’t!), read this publication and find more! To the publication>

2. Now that we must #StayHome… what if we kill some time colouring #AwesomeMicrobes? 🦠🌈 You can find many of them in this book by @jvcdelaney!

In these difficult times when we must stay home, you may be looking for fun indoor activities. Well, bacteria may come to the rescue for this matter! Within this drawing book, there is a vast world with plenty of different microorganisms in black and white. To bring them to life, you only need colour pencils and the will to discover the different beings drawn in these pages! Initiatives like Light Under The Lens prove that science and art aren’t so far away from one another! To the publication>

3. Some populations of the rough-skinned newt can produce one of the most potent poisons on Earth 🦎☠  These #bacteria may be responsible of this! 🦠

The Earth is full of living beings that are actual natural wonders! The rough-skinned newt, common in in the Pacific Northwest of North America, is a good example. Don’t be fooled by its small size and its beautiful colours, this creature can produce enough poison to kill up to twenty people! Moreover, some populations of these amphibians are covered in tetrodotoxin, a deadly neurotoxin that makes them even more poisonous. Now scientists have discovered that bacteria may be behind this “superpower”! The presence of Pseudomonas bacteria in the skin of rough-skinned newts is related to an increased level of toxicity in these creatures. A new example of how bacteria can team up with other living beings! To the publication>

4. Some #bacteria are like living electric wires! ⚡ These researches have created a system to harness the power of these “energetic” microbes! 🔬

And we keep going with nature’s wonders! Some other awesome microbes like these bacteria are able to make their own electricity! When scientists discovered this ability, the first thing that crossed their minds was probably: “Hey, let’s build bacterial batteries!”. But there was something missing. These “electric” bacteria can produce electrons, shuttle them across their membrane and then throw them away. As electricity is based on electrons flowing, if we can catch them, we could essentially build living batteries. The limitation was that to create the current, conductive materials are needed… and the most efficient ones can be toxic to bacteria. Now researchers have managed to find a balance! They have created a hydrogel matrix made of carbon nanotubes and silica nanoparticles, which conducts electricity and can be loaded with a nutrient-packed culture medium to keep bacteria alive. Maybe in the future, our mobile phones will be powered by microbes! To the publication>

5. “Hey, that’s my gene!” 🦹‍♀️ These sea algae take advantage of bacterial genes that increase their chances of survival! 🦠

One of the strengths of bacteria is that they possess an extraordinary ability to adapt to changes in their environment. After all, it is no coincidence that the living beings that we can find in the most extreme habitats tend to be bacteria. However, other organisms haven’t sharpened this skill, but excel in other strategies. A new study of three species of brown and golden-brown algae shows that gene acquisition from bacteria may have played a key role in the evolution of these organisms. Algae could have obtained through this mechanism genes to deal with stressful environments or to feed on different kinds of food. As bacteria and algae are very different —the first ones are prokaryotic, while the latter are eukaryotic— this “gene heist” may be useful to better understand the relationship between these natural kingdoms!  To the publication>

6. Humans and #microbes have a close relationship 💘 Many #bacteria live in our gut and play a key role in our health 🦠 But this isn’t the case for other creatures… 👇

Many animals that are very different to the naked eye share a characteristic trait: we all have trillions of microbes living within our guts. In some cases, like the human one, the gut microbe plays a key role in the host’s health — for instance, for processing food that we can’t otherwise digest. However, while there are many examples of relationships between complex organisms and their microbes, for other animals, these are quite irrelevant. And sometimes, this difference happens even within the same species. This is the case of ants! The microbiologist Jon Sanders travelled to Peru’s rainforest, up the Amazon River, to study the microbes living in the tropical ant’s gut. He expected to discover a great range of different microorganisms living in these insects, and that was the case for some of them. But when Sanders turned to the rest of the ants, he was surprised to find that there were almost no microbes in their guts! To the publication>

7. PET is one of the most common plastics worldwide and it’s difficult to degrade 🌍 These heat-loving #bacteria could help us with this task 🦠

Currently, plastic is a versatile and inexpensive material that you can find pretty much everywhere. And it is, at the same time, responsible for one of the most urgent environmental crises of our times, as plastic waste that can’t be recycled ends up in landfills or thrown into the sea. Now researchers have engineered a microbe that could break down a common plastic fibre used to manufacture clothing and disposable consumer products, known as polyethylene terephthalate (PET). These microbes, called Clostridium thermocellum, not only may be able to degrade PET more efficiently than current industry methods but also naturally break down cellulose. This set of skills makes this engineered bacteria a great bet for recycled textile waste containing both cellulose and PET fractions! To the publication>

8. Beetle and #bacteria: an odd but effective team in the rat race of survival! 🦠

In our Awesome Microbes section of this month, we have brought you another example of an unlikely partnership between microbes and complex organisms. The ancestors of the beetle species known as Lagria villosa picked up millions of years ago some bacteria named Burkholderia which had a very handy skill: they were able to produce a fungus-killing substance called lagriamide. Fungi were one of the greatest threats for this beetle, as they infected and destroyed the insects. As Lagria villosa learned to coat their eggs with Burkholderia, these bacteria gained nutrients and shelter from the beetle to the extent that microbes lost a lot of key genes and, with them, the capacity to live outside the insect. This is how a symbiotic link between this odd pair appeared! 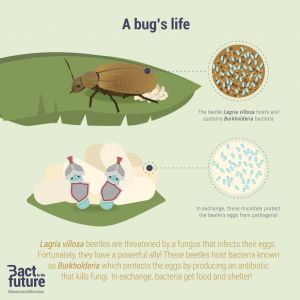 9. We are close to summertime… time to harvest! 👩‍🌾 That’s why our #AgarArtAward of May goes to this piece called “Harvest Season”, made of engineered Saccharomyces cerevisiae yeast! 🎨: Maria Eugenia Inda

Our Agar Art Award of May doesn’t go to bacteria this time, but to yeast! This microorganism has been used to obtain many basic foods such as bread, wine and beer, since thousands of years ago. Nowadays, yeast plays the same role, but it has also become the model organism to study eukaryotic cells, just as E. coli is the model organism for bacteria. The modernity of our times is hidden in the colours of this piece art: the yeast strain used to make it was metabolically engineered to produce a color palette from yellow to red! 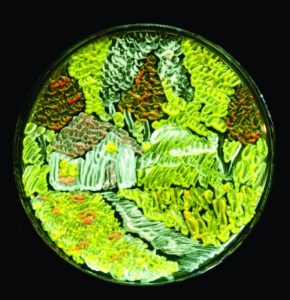 10. Our #BacterialPark is the best way to introduce kids to #AwesomeMicrobes… and without leaving your home! 🧫📕 Available in 🇬🇧  🇩🇪 🇪🇸 🇮🇹 and free for you to download! 👇

This month we opened the doors our very special Bacterial Park! This unique “microbial zoo” is full of unbelievable tiny beings that are willing to bring the world of bacteria closer to the youngest – and the not-so-young! Any brave explorer who dares to enter the Bacterial Park will share their journey with amazing microbes that produce spider silk or make delicious yoghurt, among many others. You can download this activity book from here in English, Spanish, Italian and German… and for free!